When I was a tween, my aunt gave me a three hole folder that had pocket sheets. Inside each pocket sheet were two baking recipes (one for each side), handwritten in rounded script. Over 25 years later, I’ve stuffed that folder with recipe after recipe. Some tried and true, others experiemental pieces ripped from the pages of cooking magazines. I don’t think you can see any of the baked-goods recipes anymore even though I know there’s one in there for candy-cane bread and another for peanut butter cookies. My tastes run to savory now.

A few months ago, I decided to teach my son how to cook. He’s thirteen, and I figured that know how to do a few recipes really well would put me in the good graces of his future partner. I asked him what he wanted to learn first. He responded, “Clam chowder, quesadilla, shepherds pie, and box macNcheese.” A decent mix of quick and dirty meals with two more “exotic” (at least for a thirteen year old boy) ones.

I made him a folder for his recipes too. His is red and only has three recipes in it (the quesadilla is self-explanatory), but I envision that maybe 25 years from now, his will be as stuffed and stained as mine has become. And as beloved. 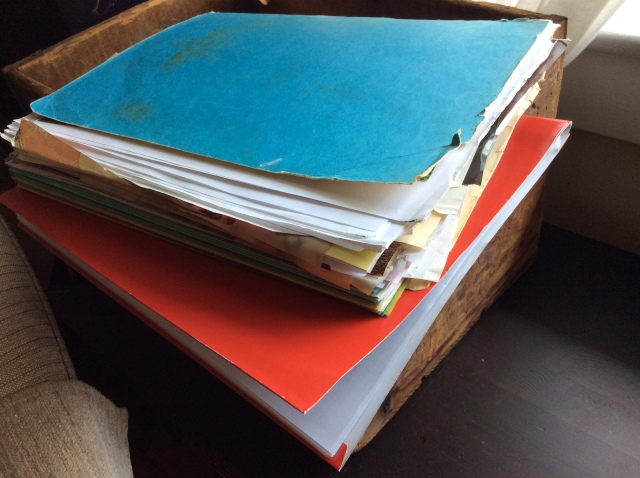