Zahatar is an acoustic string band in the Fort Collins, Colorado area that seeks to bring “modern spice to timeless tunes.” Drawing on themes from diverse traditions such as Celtic, Chinese and Spanish folk tunes, classical compositions, and bluegrass, members arrange all of their own music and compose much of it. Currently, the band consists of founding members Chris Grano (violin, arrangement, composer), Scott Stewart (viola, arrangement, composer), and Sarah Hoskins (cello). They’ve recently expanded the band’s roster for the purposes of The Little Country Project to include Shilo Stroman (percussion), ‘Cille Lutsch (flute, pennywhistle), and Emily Smith (harp). 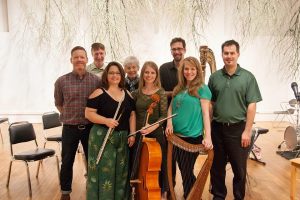 The Little Country Project is Zahatar’s first full-length album, arranged by Chris Grano with the permission of Canadian author, Charles de Lint. It is inspired by de Lint’s original compositions at the end of his fantasy novel, The Little Country. To fund the project, Zahatar held a sold-out performance of the music as well as appealed to patrons via Kickstarter. The Kickstarter campaign and the performance were collaborations among musicians, fine artist Scott Laumann, and photographer Gabriele Woolever.

The novel The Little Country follows the intermingled stories of Northumbrian piper Janey Little and the characters (Jodie and Edern) of a story she is reading. We are told in the opening sentence that music and books matter to Janey Little, setting the stakes for this book in which music and literature (and their resulting magic) are central themes.

A prolific author of more than 70 books since the early 1980’s, Charles de Lint is no stranger to intermingling of media in his works. As an author, writer, and musician, he often produces pieces that incorporate one or more artistic expression. The Little Country includes in an appendix the musical notations to original compositions by de Lint (ostensibly by the book’s hero, Laney Little). This year de Lint won the Sunburst Award in young adult literature for his Cats of Tanglewood Forest, a collaborative “fusion of word and image” with visual artist Charles Vess.

I am fortunate to know visual artist Scott Laumann who collaborated with Zahatar in creating a fantastical world in the Historic Carnegie Building in Fort Collins, Colorado, for their sold-out live performance of The Little Country Project which included original arrangement of de Lint’s musical compositions as well as readings from the novel. Scott put me in touch with Chris Grano, one of the founding members of Zahatar and key arranger of the music, who graciously answered a few questions about the project.

In Zahatar’s information page, it reads that you are all classically trained musicians who have been working together in different styles for many years. Could you describe how you all began playing together?

Scott Stewart and I met many years ago as fellow students of Carla Hager.  She was concertmaster of the Fort Collins Symphony Orchestra for several years, and was instrumental in connecting a lot of area musicians for smaller chamber music projects.  Scott and I both have a penchant for composition and the idea of new music written by living composers, so we became fast friends.  Now I serve on the board of Scott’s non-profit, NoCo Artists.  Sarah Hoskins and I met randomly and fortuitously while playing in the pit band for Carousel Dinner Theater’s “The Last Five Years,” and we just had such a synergy when we played together that we kept going with other music projects after the show ended.  Sarah has a plethora of local connections and was able to get us in touch with the newer members of the band for The Little Country Project.

As the world in some sense seems to spin out of control, ravaged by war, famine, hate, and violence, music can help us remember love, acceptance, creativity, diversity – even things like social justice and environmentalism.

Why did you choose The Little Country as your first album’s inspiration?

I’ve always been drawn to these tunes because of the enchanting story of The Little Country, and because growing up as a musician and a lover of books, it’s even more magical when there’s a connection between the two.  I was drawn to the story in The Little Country 20 years ago which led me to the music. I often played the tunes found in the back of the book on my violin, but never really did much else with them until recently.  When I pitched the idea of arranging the tunes and pairing them with readings from the book in concert to NoCo Artists, they immediately jumped on board and have supported our project all along the way.  The other key element was Charles de Lint himself, who readily gave me permission to run with this project and has been a joy to work with.

There’s a wonderful history of fantasy writers developing “supplemental” elements to their works; Tolkien developed an entire language and de Lint actually composed the songs of Janey Little. Will Zahatar’s entire album be taken from de Lint’s music in “Appendix I” or will you include traditional folk tunes and original pieces as well?

The album will include all of de Lint’s tunes for The Little Country as well as an opening and closing theme related to the text that is inspired by the music of Billy Pigg, a Northumbrian piper who is referenced in the book.

In the Jodie/Edern sections of the novel, the phrase “the magics of the world are far simpler then we make them out to be” is repeated many times as Jodie journeys toward a connection with the old music and its power; further, in the conversation that Janey and Clare have with the mystic Peter Goninan, he equates magic to music and also to a type of moral responsibility. In this story, how did you read all the connections between music, magic, and how we act on the world? How do these ideas relate to your music?

I think one of the great things about this novel is that a lot of the ideas are a foundation for individual interpretation.  In my interpretation, the connection between music, magic, and our place in the world is a spiritual one, and a type of language that speaks to people of all creeds.  Music has been proven to even have an effect on animals and plants.  What could be more magical than the ability to communicate thoughts, emotions, and dreams in this way?  Music is the universal language!  Yes, universal.  Carl Sagan ensured that a probe sent on a journey into deep space included music from Planet Earth.  Above a multitude of other things, we chose to send music into space.  If that doesn’t speak to its power, I don’t know what could.

de Lint mentions several times in The Little Country that we always seem to go back to the old tunes for inspiration.  I’ve always felt that Celtic music in particular has a way of touching people, be it a lonely highland air played by a single instrument on a hilltop or a raucous, slightly out-of-tune jig played by twenty people reeling around an overcrowded pub.  Many of these tunes have outlasted much newer music, and that’s a testament to their power.

In terms of moral responsibility, I think music is just one extension of our responsibility to the earth and to each other.  We have a responsibility because we have the ability to create music.  Therefore, we must keep the tradition alive.  As the world in some sense seems to spin out of control, ravaged by war, famine, hate, and violence, music can help us remember love, acceptance, creativity, diversity – even things like social justice and environmentalism.  All these things can be driven by music in some way, translated into messages for the masses.  And history has proven this, time and time again.

Janey Little plays many instruments but particularly the Northumbrian pipes. Does anyone in Zahatar play these pipes? Will they be on the album?

We will not feature Northumbrian pipes on the album.  We wanted to create something new inspired by something timeless, and I hope that we have succeeded.  We may delve into incorporating Northumbrian pipes in future concerts if we are lucky enough to have the opportunity to perform The Little Country Project again!

You mention that Zahatar will be doing some biomimetic remixes of certain songs. I love the idea of mixing the old sound of de Lint’s compositions with a decidedly 21st Century element. How does this re-visioning of the tunes play into the ancient power that de Lint describes in “old things”?

Music is one of those things that is open to interpretation.  Whether the notes are written on a page or learned by rote, no two people will ever play the same music in exactly the same way.  That’s where the human quality comes into play.  We all put an individual spin on music.  With the remix project, I wanted to accomplish two things – give DJs an opportunity to play around with music that they might not normally remix and prove that this music WORKS in this genre!  We’ll see, once the remixes come in, if we have succeeded in these two endeavors.  In any case, if the experiment is a success, we’ll have further translated ancient music into a modern sensibility.  The power will be in whether this music will reach even more ears as a result.  I believe that it will.

Zahatar collaborated with visual artists like Scott Laumann to create an installation concert setting for “The Little Country.” How did working with Scott and playing in the space he created influence your music? Could you give a little insight into your collaborative process with him?

I had a fairly hands-off process with Scott Laumann.  You don’t tell a genius what you want, you look on in awe at what he creates.  He did exactly as I would have wanted, anyway; he created a world for us to play in that was his inspiration after reading The Little Country and hearing some of the tunes.  Never before have I had the opportunity to perform under the boughs of an upside-down forest hanging from the ceiling of a concert hall, and I honestly don’t think I’ll ever have that experience again.  It was one-of-a-kind.  Every visual element that Scott created for that concert was iconic, from the record player with a hot-pink tumbleweed growing out of it to a literal mountain of tumbleweeds to his painting “CODA,” made with natural elements like twigs and berries.  It’s all phenomenal work, and again, testament to the power of de Lint’s story to inspire.

Further, we had the opportunity to work with Gabriele Woolever, a gifted photographer who has worked on many projects with us.  She is designing and providing photography for the album cover and liner notes.

As a Kickstarter supporter, I am excited to get the CD when it comes out. Will your album be available to the general public; how can they order it?

We are working on these logistics.  We’ll be producing the CD through CDBaby, so eventually it will be available through their website (and major online retailers like iTunes and Amazon), but we hope to also include purchasing options on Zahatar’s website in the near future as well.

For videos of Zahatar’s performance of The Little Country Project, head to their Facebook or YouTube channel.

reblogged from Beyond Journal.